Ok so this is not a battle to the death or an MTV Celebrity Deathmatch. In the world of cheese there are no clear defined winners. We definitely have clear losers, those rectangular cheeses, 1mm thick, individually wrapped – do not deserve to be called cheese! With the Grana vs Parmigiano reggiano or Parmesan Cheese (as they are both commonly called) things go a little more towards the shades of grey instead of a clear defined black and white.

This is a hard cheese that is slow ripened and is generally considered semi-fat. This cheese has a particular texture which is slightly more grainy than its counterpart, hence the term “Grana” and Padano signifies the protected region the milk comes from.

Particularly the “Po Valley Region” which is the north east side of Italy, basically the right armpit where Venice is located. Venice is actually excluded from the actual Po Valley Region. The Venetians have enough economy from the tourism sector so it was fine for them to sit this niche out. It is said to be historically one of the world’s earliest hard cheeses, founded in the years 1135 by the Cistercian Monks from the Chiaravalle Abbey. It’s popularity rose (apart from its GREAT flavour) because of its resistance to spoiling. With proper care able to keep and age for up to two years.

Nine months is the minimum ripening time for this type of hard cheese. There are 3 classifications of Grana:

The cheese is made from unpasteurised, semi-skimmed cow’s milk from two milking and generally aged for two years. At the end of the cheese making process, Grana Padano develops a firm, thick and deeply straw-coloured rind protecting the fragrant, dry, flaking interior. As Grana Padano ages, the flavours become pronounced, savory and complex and the texture becomes more crumbly.

Though similar to Parmigiano Reggiano Grana Padano is inexpensive because areas producing the cheese are bigger. Moreover, Grana is less crumbly, milder and less complex than its long-aged sibling.

The King of Cheeses as it’s sometimes referred to. According to legend, the cheese was created in the Middle Ages in the province of Reggio Emilia, particularly in Bibbiano. It is said that during the Great Fire of London the famous Parliamentarian Samuel Pepys buried his Wheel of Parmesan and wine in order to preserve them. We know this because his diary was discovered, this is what gave insight to the ravages of the fateful September 1666, (Thanks to the baker). 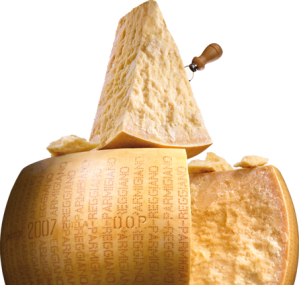 Parmigiano Reggiano cheese is aged longer than other hard grating cheeses. Aged Parmesan is known for its complex flavor and granular texture. In the producer’s aging room, the Parmesan wheels are arranged on wooden shelves. They are tended carefully by workers, who wipe, brush and turn them every 10 days. The outsides of the wheels gradually dry to form a natural (and completely edible) rind. After one year, an independent expert (battitore) evaluates each wheel. Tapping each one with a special hammer, the tester listens for tones indicating whether the cheese has aged in the way it should. As another quality test, thin probes may also be inserted and sniffed.

Parmigiano Reggiano wheels that pass inspection—and nearly all do—are fire branded with the oval Consorzio Tutela Parmigiano Reggiano certification mark. The cheese tester then determines whether further aging is desirable for a particular Parmesan wheel. Some wheels are best enjoyed young, between 12 and 18 months. The rinds of these so-called Mezzano (medium aged) wheels are grooved with horizontal rings that allow the Parmigiano Reggiano pin dots to show through.

Most wheels, however, are aged for a total of 18 to 36 months—24 months, on average. Additional aging permits full development of the cheese’s flavor potential.

The Parmigiano Reggiano or Parmesan cheese is a king of cheese not because it is better than its counterpart, Grana Padano. It’s because it has more restrictions before it is made, with more checks and balances by independent testers and professionals before it is released for consumption to the public.

The conclusion of something like this is always the same, budget. Everyone would love to buy a Ferrari but unfortunately budget allows us to purchase a Fiat, or Alfa Romeo. Both will do the job, but there is reason for spending more money when it comes to cheese. The aging process of a cheese opens it up to vulnerabilities such as spoilage so like a fine  single malt whisky, the age would be a direct factor to the deeper flavour and hence price. We at Salumeria can respect both the Grana Padano and Parmesan Cheese as they both perform a selfless act of making our lives all that tastier. Our ultimate conclusion would be, in order to have this type of hard cheese in our lives, go for the Grana Padano. Especially when grating into pasta dishes etc… Once in awhile, for a platter with friends then it might be an idea to spoil yourself a little and plunge for the Parmigiano Reggiano.

Don’t forget to mention that the rind of this hard cheese is completely edible, but do you think Samuel Pepys ate it after he buried his?

Question: Why did the Parliamentarian Bury the Cheese?

Answer: Because he didn’t want to melt it!

We at Salumeria really believe that Sharing is Caring! We love it when our clients interact with us on social media. So like , share and comment on our posts. We love to hear what you feel about #SALUMERIA ;)